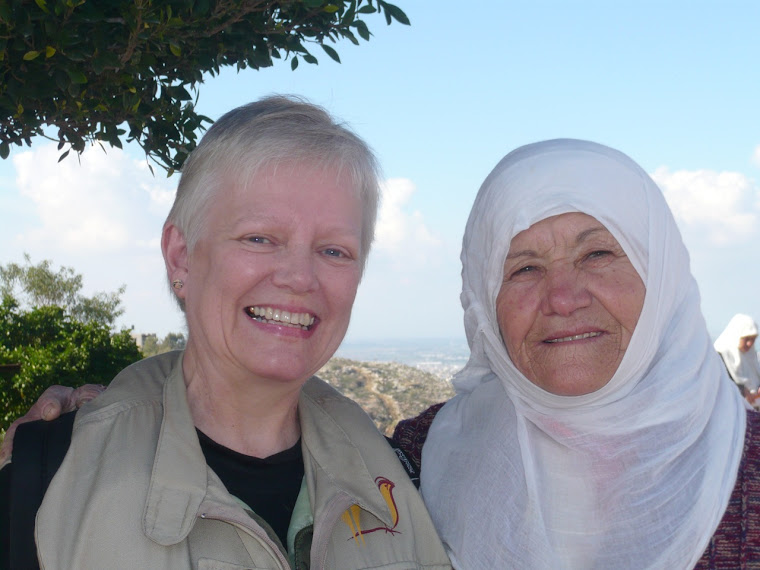 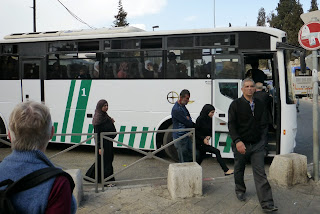 It was the fulfillment of a dream come true to once again return to Palestine and specifically to Tulkarm where I began my placement with EAPPI 3 years ago. This time I returned traveling with my husband, Obed, prior to our attendance at the SABEEL conference.

We traveled on the local bus from Jerusalem to Ramallah, another bus to Nablus and another bus to Tulkarm. Even though we had given our friend Sadi an approximate arrival time, we knew it would be dependent upon how long it would take to get through the checkpoints. Once I saw the first checkpoint tower, a flood of memories returned. Restricted movement was my thought as I braced for the bus to be stopped and the IDF to come on board with their AK-47s. 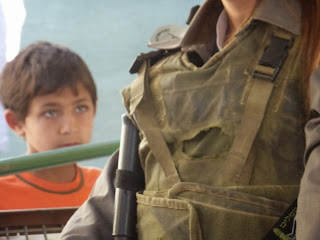 The Palestinian people are very familiar with this inconvenient and scrutinizing effort on the part of Israel's military to control their lives. It comes in the form of disrespect and intimidation. The Wall was very visible as well as we continued our journey. The Wall is an apartheid system built by Israel because of their belief that separation will increase the security of the Israel population. This isn't just a simple structure but rather a 30 foot high chunk of concrete winding its way inside the green line on precious Palestinian farmland.

The 3rd realization was the rapidly expanding settlement system built illegally and in violation of International Law on Palestinian land. Along with the growth of settlements has come a total guaranteed infrastructure for the Settlers, roads only for settlers, guaranteed security from the IDF, guaranteed water source coming from Palestinian aquifers, etc. The settlements are expanding at such a fast rate and in doing so they gobble up Bedouin communities, olive groves and Palestinian communities.

Since tourists rarely come to town, we were obviously outsiders. But as we stepped off the bus we were met by smiles and greetings. A coffee merchant on the corner recognized me and said "It is good to see you again. Most everyone we met said: "you are welcome." Sadi and Dalbah soon found us and the rest of our visit was spent renewing friendships and engaging in significant conversations. 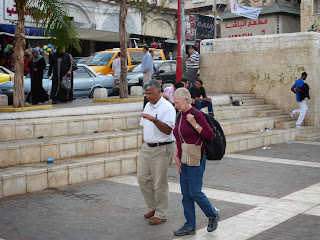 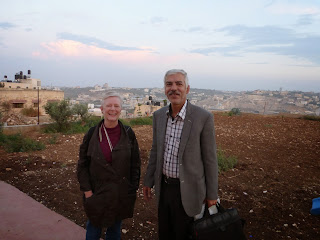 The two men were very important contacts for our EA team 38 of EAPPI and they continue to be community leaders who are very engaged in non-violent resistance to the Occupation. Since there are no tourist accomodations in Tulkarm we were graciously housed and fed by our friends and their families. It was so enjoyable to share a meal of exquisite Palestinian cuisine while visiting with Sadi, Dalbah and their families. Rather than focusing on how they have suffered through the continuing years of Occupation, they shared their hope of the future of Palestine. 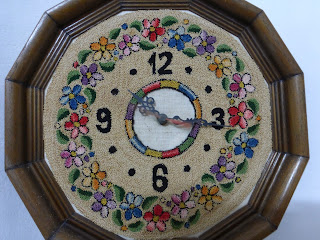 
Susanne
Posted by Susanne at 7:06 AM No comments: